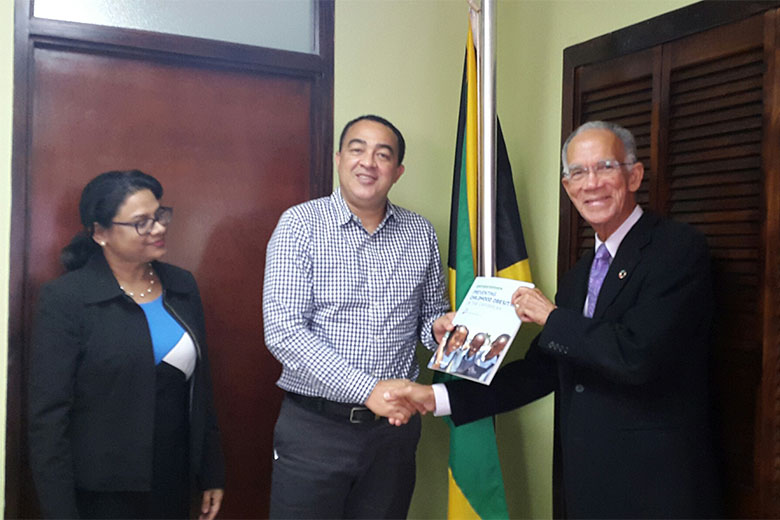 HCC President visits the Jamaica Minister of Health,  the Honourable Dr Christopher Tufton. The President of the Healthy Caribbean Coalition Sir Trevor Hassell paid a visit to the Honourable Dr Christopher Tufton Minister of Health during a recent visit to Jamaica to attend the launch of the Regional Centre for Research Excellence in Cardiometabolic Disease and Cancer. The meeting was also attended by Dr Jacquiline A. Bisasor-McKenzie, Acting Chief Medical Officer and Dr Tamu Davidson, Director – Non-communicable Diseases (NCDs) Unit, National Focal Point – NCDs in the Health Promotion and Protection Branch.

During the visit Sir Trevor extended an invitation to the Minister to attend the upcoming April 2018 Healthy Caribbean Coalition and World Diabetes Foundation NCD Forum and deliver the Opening Address on the 23rd April 2018. In accepting the invitation it was expressed that the Forum would provide an opportunity for the Minister to share Jamaica’s sterling efforts aimed at reducing childhood obesity with CARICOM countries.

Sir Trevor also took the opportunity to present a copy of the recently produced Healthy Caribbean Coalition Civil Society Action Plan 2017-2021: Preventing Childhood Obesity in the Caribbean which details CARICOM civil society blueprint for action to contribute to reduction of childhood obesity identified by CARICOM Heads of Government as a regional and national priority. Included among the civil society initiatives shared with the Minister were the My Healthy Caribbean Schools programme aimed at creating a platform for reporting on the nutrition and physical activity related environment of Caribbean schools as a motivator for action, and the Childhood Obesity Prevention Scorecard (COPS) which is a monitoring tool which measures policy progress across key indicators for childhood obesity prevention.

Minister Tufton in responding to the invitation and to the presentation of the Childhood Obesity Action Plan, highlighted that the focus of the Healthy Caribbean Coalition was well aligned with that of the Ministry of Health and the Government of Jamaica and indicated that Jamaica had over the past several months taken several steps to reduce childhood obesity, some of which included Jamaica Moves Campaign, establishment of National Food Industry Task Force (with work in areas such as product reformulation and accelerated work on nutritional labelling), increased public education, and creation of healthier schools with ever increasing consideration being given to the eventual imposition of a tax on sugar sweetened beverages.

Centre for CardioMetabolic Disease and Cancer Research in the Caribbean Launched