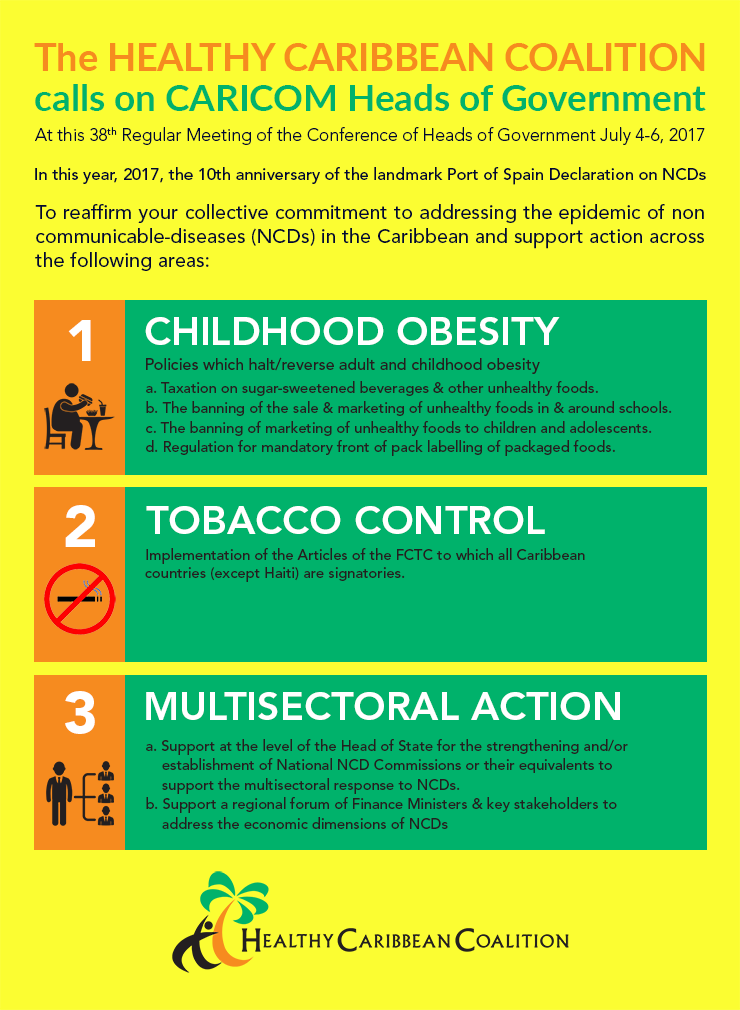 In this year, 2017, the 10th anniversary of the landmark Port of Spain Declaration on NCDs

To reaffirm your collective commitment to addressing the epidemic of non-communicable diseases (NCDs) in the Caribbean and support action across the following areas:

In this, the 10th anniversary year of the landmark Port of Spain Declaration (POSD) on NCDs, the members of the Healthy Caribbean Coalition (HCC), Board of Directors, staff and volunteers, call on you, the leadership of the 15 member states and 5 associate member states of CARICOM to reaffirm your collective commitment to addressing the epidemic of noncommunicable diseases (NCDs) in the Caribbean.

The HCC, born out of the 2007 Port of Spain meeting, is a regional alliance of NCD focussed civil society organisations (CSOs), representing over 120 health and non-health CSOs in the region. We advocate for NCD programmes and policies across the region in partnership with CSOs, PAHO, CARPHA and CARICOM.

10 years ago, in an unprecedented event, Heads of Government of CARICOM acknowledged the urgency of chronic diseases as a development issue and called on each other to launch an impressive regional response defined by the 15 mandates and 27 commitments of the POSD. A catalytic effect followed leading to the global acknowledgement of the seriousness of the issue and the first ever UN high-level meeting on NCDs in 2011.

See the fullopen letter from HCC to CARICOM Heads of Government here.

Mike Bloomberg Announces Support to Fight Obesity in the Caribbean