HCC Amongst the Winners of the 2021 NCD Alliance Campaign Fuel Awards! 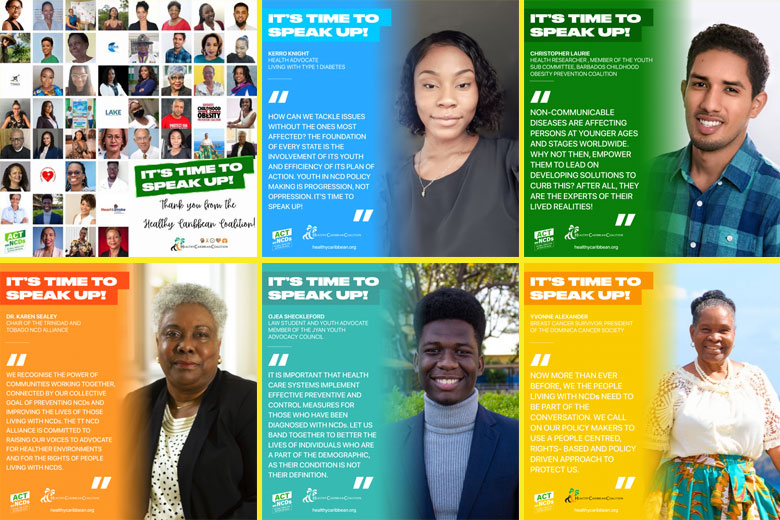 We are pleased to announce that the HCC was one of the ten winners of the NCD Alliance Campaign Fuel Awards 2021.  In support of the NCD Alliance led Global Week for Action on NCDs, which took place during the week  6-12 September 2021, HCC carried out and extensive social and digital media campaign creating visuals with quotes from our CSO members and member’s of the Healthy Caribbean Youth, read more.

The following is an extract taken from the NCD Alliance website announcing the winners.

Each year, the Global Week for Action on NCDs calls on everyone, everywhere to get involved in collaborating across countries and sectors towards a common goal: reducing preventable death and illness and increasing health and equity around the world. The Campaign Fuel Awards began in 2019 to recognize national and regional member alliances for their inspirational activities.

In 2021, the Global Week for Action on NCDs campaign theme was community engagement. 10 winning alliances were selected from Asia, Africa, and the Americas, representing the diversity of campaign action, innovation and context. Here is an overview of their activities!

Bangladesh NCD Forum: Activities included a webinar for journalists, a youth workshop, a webinar where people living with NCDs discussed calls to action relating to their experiences during the pandemic, and an advocacy event for the Global Charter on Meaningful Involvement of People Living with NCDs. A position statement on community engagement was shared with the Bangladesh Parliament.

Cameroon Civil Society NCD Alliance: The Cameroon Civil Society NCD Alliance focused on mobilising community and civil society to drive advocacy on NCDs. Their activities included a football match between older adults and people living with NCDs, which culminated in large-scale awareness-raising and health screening, as well as a social media campaign and plenty of press coverage on TV and radio.

Healthy Latin America Coalition: They used social media to highlight messages of people living with NCDs during the pandemic, and held a webinar ahead of the Directing Council Meeting of PAHO on giving priority to NCDs, strengthening the voice of people living with NCDs, and connecting NCDs to Universal Health Coverage. They also delivered two statements during the meeting.

Ghana NCD Alliance: The campaign focused on reaching communities where they are, as with the yam festival, while also leveraging traditional and social media. Activities include awareness-raising at the yam festival, a statement shared with the government and media, and a breast cancer community forum.

Healthy India Alliance: Ahead of the WHO SEARO Regional Committee meeting, they disseminated the Global Charter on Meaningful Involvement of People Living with NCDs, shared a video by NCD champions focused on community engagement and NCD prevention and control, hosted a mental health dialogue, and organised a cancer screening.

NCD Alliance Kenya: The alliance focused on the involvement of people living with NCDs, scheduling interviews with them on radio and television, releasing a press statement on the NCD response drafted by them, and implementing a social media campaign. They also hosted a webinar on meaningful involvement, and organised a teen health run.

Togo MNT Coalition: Activities included capacity development on communication techniques and advocacy organised with people living with NCDs, a press conference on the Global Charter for the Meaningful Involvement of People Living with NCDs, and a social media campaign and digital activation.