Get the Message Campaign 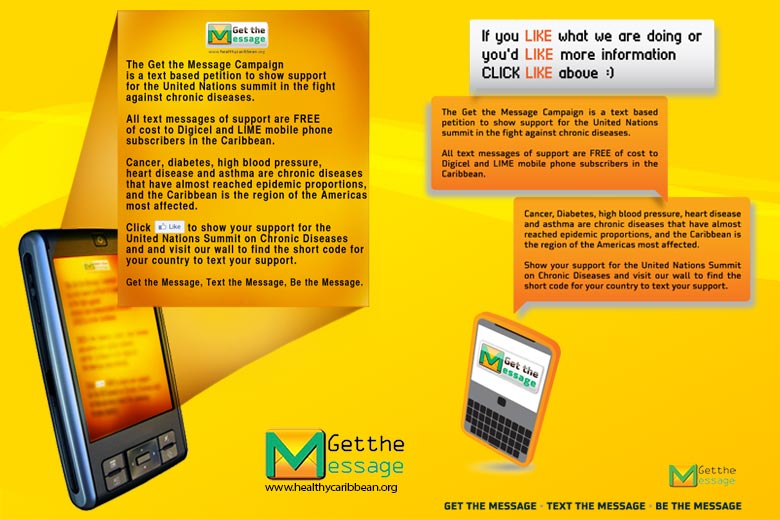 Get the Message: On 18th March 2011 the Healthy Caribbean Coalition launched a civil society led Health Revolution: a text based Social and Traditional Media Communication Advocacy Campaign to inform people of the Region about chronic diseases and their risk factors, and support Caribbean Leaders at the United Nations High Level Meeting (UNHLM) on chronic disease, September 2011.

It achieved the following results:

Some images from the launch. 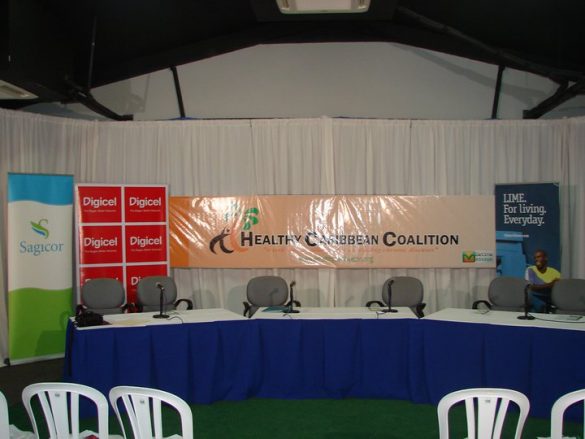 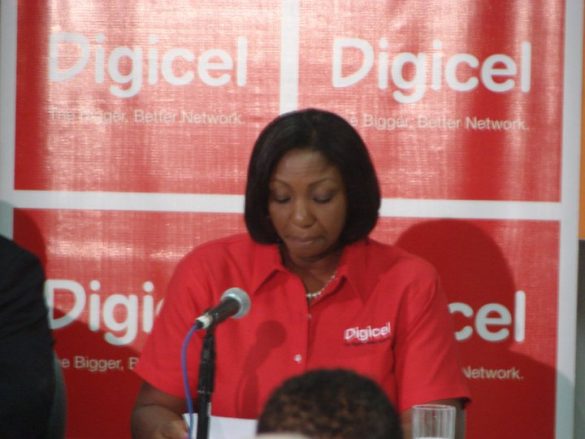 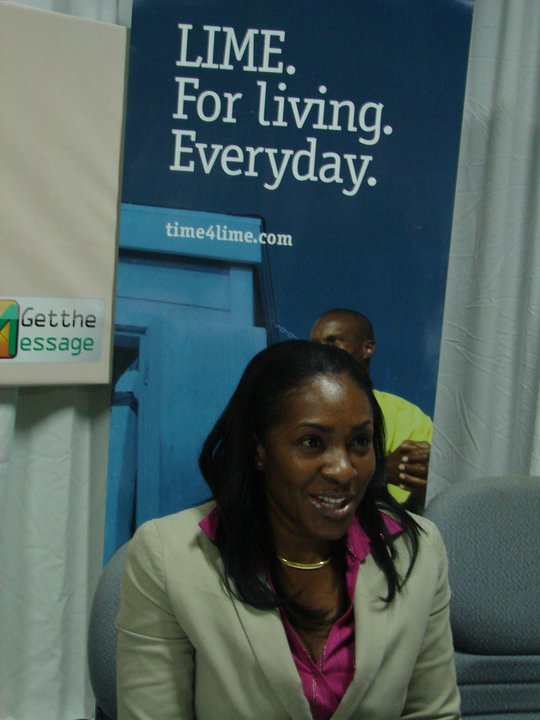 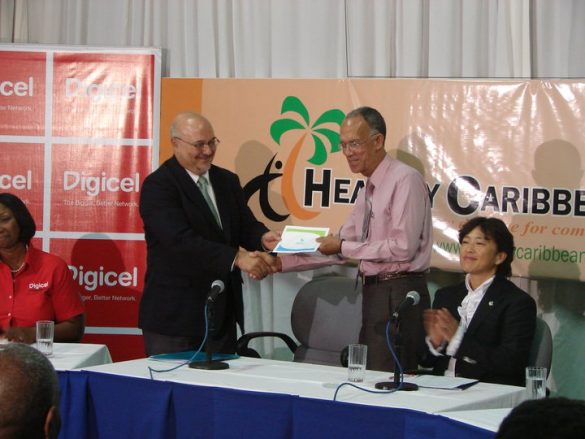 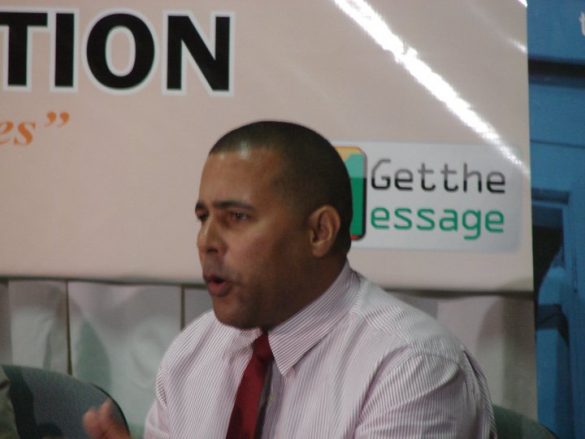 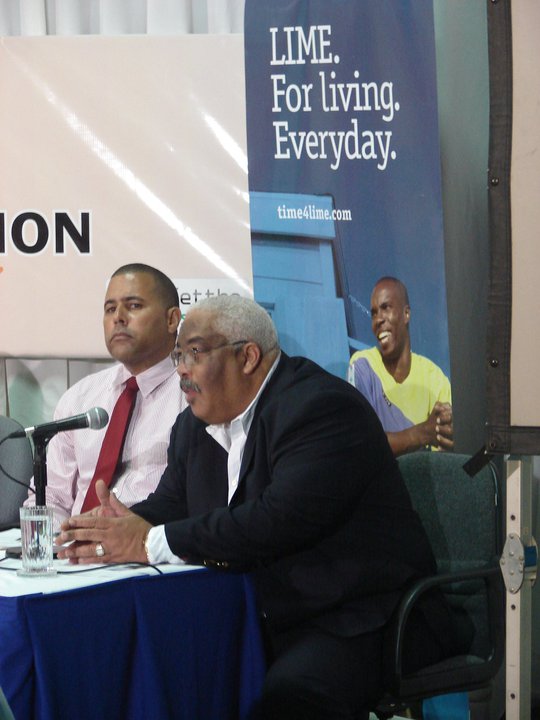 The President of the Healthy Caribbean Coalition, Professor Sir Trevor Hassell, talking about the Get The Message Campaign.

Another video about the Get the Message Campaign.

A GetTheMessage leaflets can be seen here and here.

Below is some of the information surrounding the campaign.

Objective
The campaign seeks to mobilize and empower Caribbean people by better informing them of chronic diseases and
associated risk factors. It aims to indicate support for Caribbean leaders at the UNHLM with the goals of impressing on them the need to aggressively address the common disease risk factors of tobacco exposure, excessive alcohol, unhealthy diet and physical inactivity; and the re-structuring of health systems to deal effectively with healthcare for chronic noncommunicable diseases.

This event was triggered by Heads of Government of the Caribbean. It is a once in a lifetime opportunity to focus
world attention on a group of diseases which account for 60% of deaths world-wide and have an enormous economic and development impact throughout the world. The goal of the Summit is to increase funding and improve prevention and treatment of chronic diseases globally.

The “Get the Message” campaign.
The campaign was launched by the Healthy Caribbean Coalition and its regional media partners, service providers, health insurance providers with PAHO/WHO providing technical assistance on the 18 March 2011 and will end on the 18 September 2011.

Radio, television and newspaper advertisements will be placed at regular intervals in the media of Associate Member and Member States of the Caribbean Community of Countries (CARICOM) where possible and considered strategic. These advertisements will have 3 components; lifestyle/chronic disease information, request to text support for the UNHLM, and logos and names of the supporters of the campaign. Advertisements will also be placed on the Healthy Caribbean Coalition website and that of member and supporting organizations.

The campaign will use viral marketing with the support of internationally recognized Caribbean entertainers. Using a combination of new media approaches, telephone service providers will advertise the campaign and seek indications of support, principally through short code text messages.

Telephone service providers will offer their cell phone customers an opportunity to receive daily health tips about lifestyles, risk factors and chronic diseases. Telephone service providers will initiate actions and use opportunities in their usual and customary communicating, marketing and promoting efforts to promote and seek indications of support for the Summit from their customers. The Healthy Caribbean Coalition will use its website and that of its member organizations, Facebook and Twitter to advertise and “create a buzz” about the campaign.

Text messages of support at organization and country level will be actively solicited using the Healthy Caribbean Coalition network of members and supporters. The lead member organizations of the Coalition in each Caribbean country will be  given a target of text messages for his/her country.

A count of endorsement text messages, and other responses will be carried out and the results made available at regular intervals over the course of the campaign. The campaign will be monitored and evaluated, and and impact assessment undertaken. A report will be presented to Heads of Government of CARICOM countries.

Mobile phones and social media in the response to NCDs

Accelerating Nutrition Polices in the Caribbean 2019