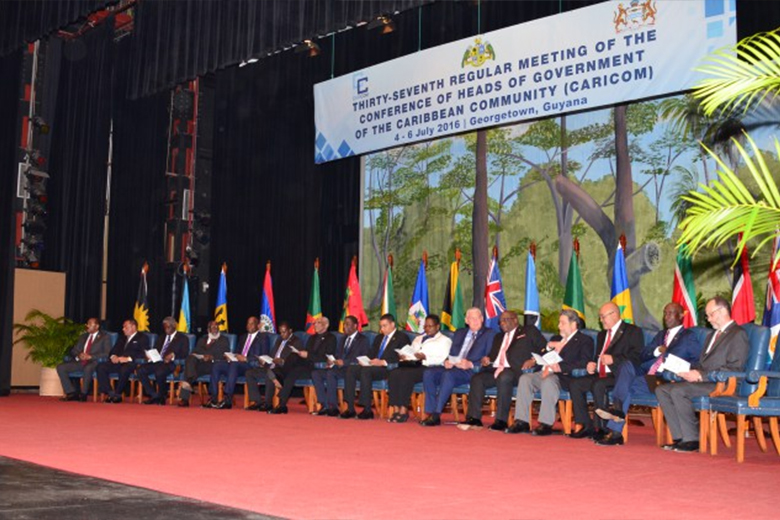 Communiqué issued at the conclusion of The Thirty-Seventh Regular Meeting of the CARICOM Heads of Government, 4-6 July 2016, Georgetown Guyana.

“Its a milestone, to have had Health/NCDs on the CARICOM Heads of Government Agenda, and for their specific declarations, which build on the Port of Spain Declaration”
Dr. C James Hospedales, Executive Director of CARPHA and Special Advisor to the HCC

The Thirty-Seventh Regular Meeting of the Conference of Heads of Government of the Caribbean Community (CARICOM) was held at Georgetown, Guyana, on 4 – 6 July 2016.  The Prime Minister of Dominica, the Honourable Roosevelt Skerrit, chaired the proceedings.

CARICOM Heads of Government addressed health related issues affecting the development of the Region, specifically Non Communicable Diseases (NCDs),” the regional response to HIV and AIDS, and the Every Caribbean Girl, Every Caribbean Woman Initiative (ECGECW)

As the Tenth Anniversary of the historic Port of Spain Declaration “Uniting to fight the Non-Communicable Diseases (NCDs)” draws near, the Heads of Government recognised the progress made in addressing the issue. They acknowledged, however, that progress was variable and agreed to adopt a more holistic approach. In this regard, they pledged to address issues such as the banning of smoking in public places; trade related measures; banning advertisement of potentially harmful foods which specifically target children; and elevating taxes on foods high in sugar, salt and trans-fats.