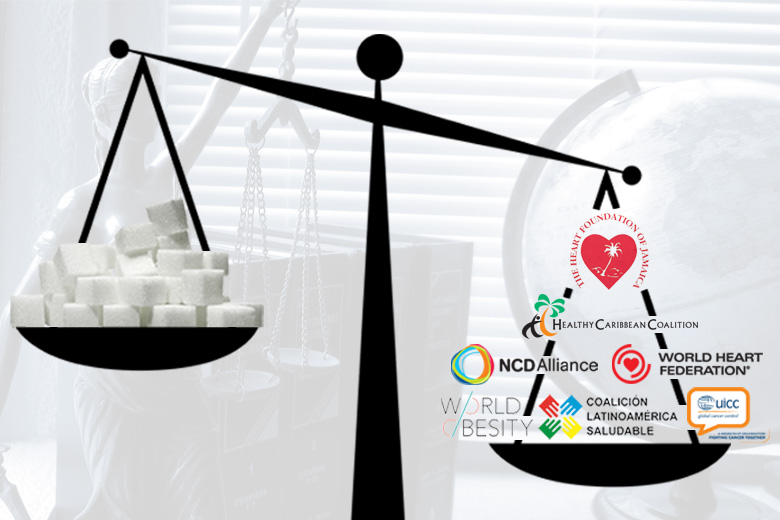 Public Health prevails in Jamaica as on Tuesday May 1st, the lawsuit filed against the Heart Foundation of Jamaica (HFJ) by Wisynco Group Limited (“Wisynco”) was voluntarily withdrawn.

The withdrawal of the lawsuit against the Heart Foundation of Jamaica follows a wave of support from across the globe, lead by the HCC, the Healthy Latin America Coalition (CLAS) the NCD Alliance and it’s partners.

Here is a statement released by the Heart Foundation of Jamaica:

STATEMENT FROM THE HEART FOUNDATION OF JAMAICA
May 1st, 2018

On Tuesday May 1st, the lawsuit filed against the Heart Foundation of Jamaica (HFJ) by Wisynco Group Limited (“Wisynco”) was voluntarily withdrawn. The HFJ is pleased that Wisynco has taken this step.

However, in order to correct some inaccuracies being circulated and for clarity, we would like to state the following:

Given the rising rates of non-communicable diseases (‘NCDs’) and obesity in Jamaica, the Heart Foundation last November, launched a public health awareness campaign, along with the Ministry of Health/Jamaica Moves. The objective of this campaign is to raise awareness about the dangers of consuming excessive sugar from sugary sweetened beverages (SSB’s) which can lead to obesity. In Jamaica SSB’s are the main contributor to sugar intake. The campaign informs the public about the levels of sugar present in SSB’s. Consuming excess sugar increases the risk of diabetes, liver and kidney damage, heart disease, and some cancers.

Unlike fruits, and other complex carbohydrate-containing foods, sugary drinks are non-essential foods with little or no nutritional value. Sugary drinks are particularly harmful to the body as sugar in liquid form is absorbed more quickly by the liver than the liver might be able to process and release, the excess becoming stored as fat or glycogen deposits in the liver. This can lead to fatty liver disease and increased risks for diabetes and other NCDs. SSB’s do not satisfy hunger, are widely available and relatively inexpensive. Drinking SSBs can therefore lead to excess calories which contributes to weight gain and obesity.

Leading health organizations like World Health Organization have warned about the growing obesity epidemic and proposed solutions to address this problem, including cutting back on sugar consumption. For this reason, Heart Foundation joined many health and consumer organizations worldwide to deliver this important message to consumers in their countries.

We are encouraged by recent announcements from some private sector companies that they have, or are working on, reducing the sugar levels in their products. This is a positive development and we hope that other companies will consider this measure in the interest of public health.

The Healthy Latin America Coalition or CLAS
OPEN LETTER RE: THE WISYNCO GROUP LIMITED LAWSUIT AGAINST THE HEART FOUNDATION OF JAMAICA
See the original letter here.