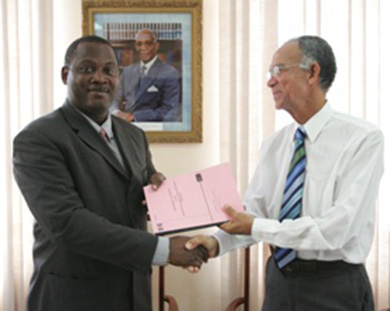 The National Commission for Chronic Non-communicable Diseases’ Draft Strategic Plan 2009-2012 is now in the hands of Minister of Health, Donville Inniss.

Chairman of the Commission, Professor Trevor Hassell, in discussing the recently presented document, made the point that it would guide its work, enabling it to facilitate and oversee the implementation of plans for the prevention and control of chronic non-communicable diseases (CNCDs) on the island.

He said: “The Commission will seek to change the national environment by advising and encouraging appropriate legislation, and the development of national policies, strategies and actions. This would help Barbadians pursue more easily lifestyles of increased physical activity, healthy eating and avoid exposure to tobacco; thus leading to a reduction of chronic diseases. It would also promote the need for improved care for those suffering with chronic diseases.”

In commending the Commission on the Strategic Plan, Minister Inniss said: “CNCDs are a major health issue for us and it is costing taxpayers quite a bit of money.” He noted that in the last financial year, the Queen Elizabeth Hospital (QEH) spent some $90 million of its budget treating CNCDs, in respect of hospitalisation, drugs, clinical and support staff costs, amounting to 60% of the budget.

The Health Minister added that for the same period, the Barbados Drug Service spent about $31 million out of its $50 million budget on drugs associated with the treatment of CNCDs.

While giving the assurance that the Ministry would assist, where possible, with “requisite support mechanisms”, including physical space and human resources, he told members of the Commission: “I believe Commissions like these need a secretariat to support them…It is alright to come up with a document like this, but then we need to translate it into action…to assist the work of the Commission.”

The importance of forming partnerships with the community as well as with the social partners was also addressed. It was noted that the Commission would have to work on design interventions, ensuring that messages reached leaders in their respective fields of the trade unions, the private sector and Government, to gain necessary “buy-in” for the work of the Commission and the importance of treating CNCDs.