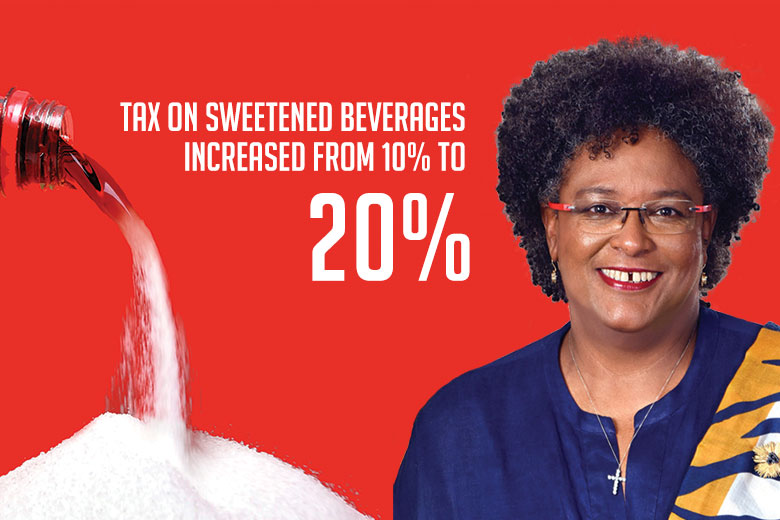 PRIME MINISTER AND MINISTER OF FINANCE, ECONOMIC AFFAIRS AND INVESTMENT

The Healthy Caribbean Coalition (HCC), in solidarity with our member organisation the Heart and Stroke Foundation of Barbados, commends the Government of Barbados on the recent announcement that the 10% excise tax on sweetened beverages, introduced in 2015, will now be raised to 20%, effective April 1st, 2022.

Fiscal policies such as taxation on sugar-sweetened beverages (SSBs) of at least 20% are one of many evidence-based interventions put forth by the Pan American Health Organization (PAHO)/World Health Organization (WHO) for the prevention and control of NCDs and is supported by the regionally endorsed CARPHA Six Point Policy Package.[i],[ii]

Taxation of SSBs is justified by robust evidence and has resulted in positive changes in consumer behaviours and income revenue with no long-term negative economic impact. This has been seen locally, where the 10% tax contributed to a 4% reduction in SSB consumption and an average 7.5%  increase in water consumption.[iii] Regionally, Bermuda’s 75% tax on sugary soft drinks, candies, pure-sugar and cocoa products raised $5,402,000 in the 14 months post implementation which funded health and wellness initiatives.[iv]  Research from the US, UK and Mexico noted no significant job loss or other negative economic effects on industry post-tax.[v] Policymakers in the Caribbean have noted the overwhelming evidence as both Antigua and Barbuda and Saint Kitts and Nevis have announced  commitments to tax sugary beverages in 2022.

SSB taxation is one of the priority policy areas for the HCC as part of our broader agenda to combat unhealthy diets by promoting a package of healthy food policies including taxation, subsidies, the introduction of mandatory high-in octagonal front of package nutrition warning labelling on pre-packaged foods and the regulating of the sale and marketing of SSBs and unhealthy ultra-processed foods in school settings. We are encouraged by the Government and people of Barbados’ commitment to make the healthier choice the easier choice as evidenced by the country’s recent vote of support for the regional front of package warning labelling Standard, as well as the comprehensive National School Nutrition Policy which will shortly be considered by the Cabinet of the Government of Barbados for adoption as national policy.

The HCC proudly recognises the exemplary national advocacy efforts led by the Heart and Stroke Foundation of Barbados, the Barbados Childhood Obesity Prevention (BCOP) Committee and the BCOP Youth subcommittee to build community awareness and support for childhood obesity prevention policies. Civil society has a critical role to play in supporting governments in delivering on their commitments to build healthier resilient societies.

The HCC applauds the leadership and vision of the Government of Barbados in this action which sends a strong signal, both nationally, regionally and globally, that Governments are willing to walk the talk and take concrete policy steps which make healthy food choices easier for all citizens.  The HCC is committed to our continued support and partnership with the Government of Barbados as we work collaboratively to tackle obesity and NCDs in order to build healthier and more resilient Caribbean communities.

The Board of Directors, staff and volunteers of the HCC, Technical Advisors and the 100+ HCC CSO Members

View the congratulatory visual placed in the local press here.

[i] World Health Organization. (2017).  Tackling NCDs: ‘Best Buys’ and other recommended interventions for the prevention and control of non-communicable diseases.  WHO/NMH/NVI/17.9