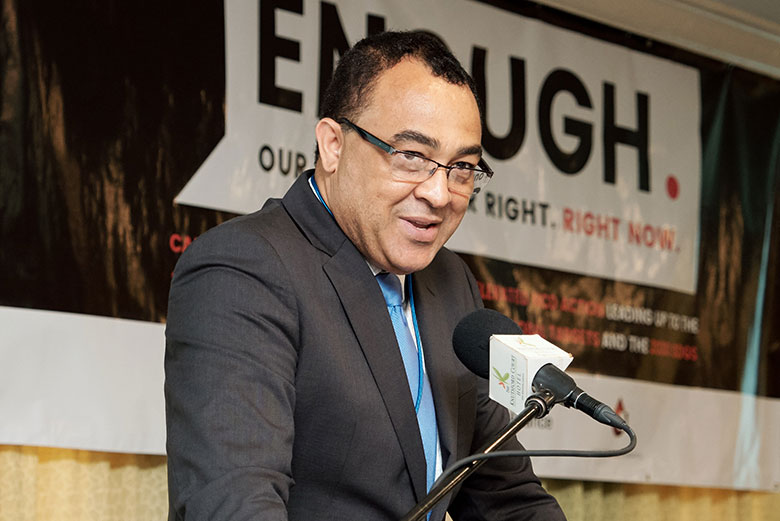 TO DR. THE HONOURABLE CHRISTOPHER TUFTON MP
MINISTER OF HEALTH OF JAMAICA

The Healthy Caribbean Coalition (HCC) wishes to congratulate the Ministry of Health, Jamaica and the Government of Jamaica on your June 5th, 2018 Parliamentary announcement of a restriction on sugar sweetened beverages (SSBs) (beverages that contain sugar or syrup that is added by the manufacturer excluding 100 per cent juice or unsweetened milk), in Jamaican schools and public health facilities effective January 2019. This action taken by the Government of Jamaica supports the HCC Civil Society Action Plan 2017-2021: Preventing Childhood Obesity in the Caribbean and the HCC Call to Action, both of, which call on the Governments of CARICOM countries to implement a package of evidence based policy actions aimed at tackling childhood obesity.

The HCC strongly supports this policy measure, which is part of a wider strategy to combat the urgent epidemic of childhood overweight and obesity we are facing in Jamaica and the wider Caribbean. We look forward to seeing the details of the policy in the coming months. This will be useful for other regional governments keen to follow the leadership of Trinidad and Tobago, Bermuda, and now Jamaica – in taking population-level policy measures to create healthier school environments.

The restriction on sugary drinks in schools aligns with actions endorsed by the World Health Organisation Report of the Commission on Ending Childhood Obesity: Implementation Plan which calls for the elimination of the provision or sale of unhealthy foods, such as sugar-sweetened beverages and energy-dense, nutrient-poor foods, in the school environment. The Caribbean has the highest NCD mortality rate in the Americas and 40% of these deaths occur prematurely before the age of 70 years. Obesity is a major underlying factor which contributes to the development of NCDs, such as diabetes and cardiovascular disease. One in three Caribbean children are either overweight or obese placing them on trajectory for health complications in childhood and adolescence and increased risk of NCDs in adulthood. The implementation of policies that support obesity prevention and reduction efforts are key to making the environments in which our populations live, work and grow less obesogenic. The ban on SSBs in public health infrastructures, which is set to coincide with the SSB ban in schools, shows a commitment by the Jamaican Government to creating environments that promote healthier diets. Such policy measures, when implemented effectively, create strong regulatory environments which help drive product reformulation and encourage manufacturers and retailers to increase the availability of affordable, healthier food and beverage options. Every Caribbean country is a signatory to the Convention on the Rights of the Child (CRC) thereby underscoring the important role of governments to ensure that those most vulnerable in the population – our children – are protected from continuous exposure to harmful environments that promote consumption of products high in salt, sugar and trans fats.

Against the background of the recently launched WHO Global Action Plan on Physical Activity 2018-2030, the HCC also wishes to take this opportunity to congratulate the Government of Jamaica on the Jamaica Moves Initiative, which aims to educate, encourage and empower Jamaicans to eat healthily and increase their levels of physical activity.

The HCC applauds the leadership of the Government of Jamaica in its actions taken to combat NCDs and welcomes continued bold action in this area through further implementation of the WHO NCD Best Buys and looks forward to your presence at the highest levels at the upcoming 3rd UN High Level Meeting on NCDs in New York on September 27th, 2018.

– The Board of Directors, staff and volunteers of the HCC, Technical Advisors and the 100+ HCC Members

Sagicor Life Inc. Reaffirms its Commitment to the HCC