Compelling Evidence for Tax on Sugar-Sweetened Beverages in Jamaica 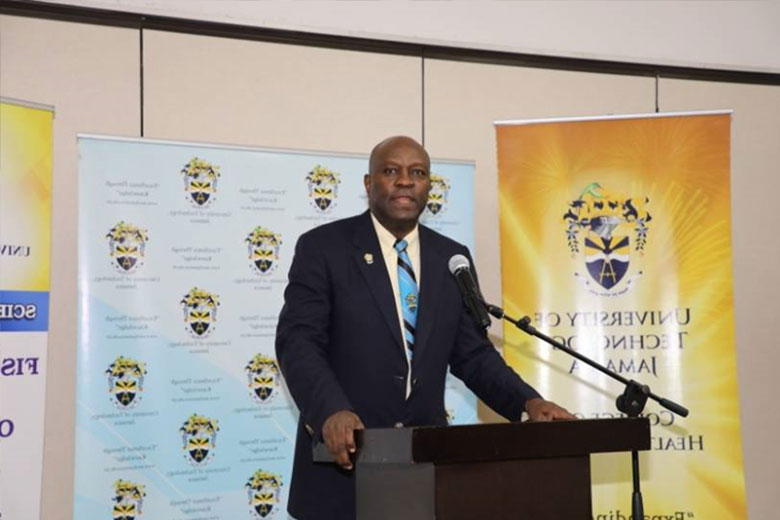 A Scientific Symposium hosted by UTECH, Jamaica  presented compelling evidence for the introduction of tax on sugar-sweetened beverages (SSBs) in Jamaica.

Local, regional and international presenters  from academia,  NGOs, development agencies and the public sector  provided evidenced-based data in strong support of the introduction of a tax on sugar- sweetened beverages (SSB) in Jamaica, during a scientific symposium titled “Fiscal Measures to Prevent Obesity/NCDs in Jamaica:  Focus on Sugar-Sweetened Beverages”  hosted by the University of Technology, Jamaica (UTech, Jamaica) on Thursday, January 11, 2018 at the Spanish Court Hotel in Kingston. The Symposium was also attended online by up to 100 people, thanks to an ongoing partnership between The UWI Open Campus and the Healthy Caribbean Coalition.

Symposium convener Prof. Fitzroy Henry, Professor of Public Health Nutrition, College of Health Sciences, UTech, Jamaica and Chairman of the National Food Task Force explained that the objectives of the symposium were to present the rationale for a fiscal approach to healthy eating in Jamaica and to identify the challenges and opportunities for introducing a tax on sugar-sweetened beverages (SSBs).

The focus of the symposium on SSBs stemmed from the evidence showing that sugar-sweetened beverages make up the largest contribution of sugar intake in Jamaica and in most countries. Sugary drinks have no nutritional value and are particularly harmful to the body because the liquid form is absorbed more quickly by the liver than it might be able to process and release it.  The excess sugar becomes stored as fat or glycogen deposits in the liver. This can lead to fatty liver disease and increased risks for diabetes and other NCDs.

Prof. Stephen Vasciannie, CD, President, UTech, Jamaica in welcoming the over 100 participants including those who joined via live stream from across the Caribbean, said that “this symposium is a welcome further step in providing a platform for contribution to national policies and programmes which the evidence shows is urgently needed to reduce the consumption of sugar-sweetened beverages to curb the rise in obesity and NCDS, especially among our youth population.”    The President noted that one of the significant ways in which UTech, Jamaica is engaged in this national priority is through research, outreach and partnership.

left unchecked, obesity and its consequences will not only retard health and economic development but importantly also erode the health advances made in the last decades
Dr. the Hon. Christopher Tufton

Leading Underlying Cause of Morbidity
Minister of Health, Dr. the Hon. Christopher Tufton, MP in his address at the opening ceremony, pointed to some of the alarming data on Non-Communicable Diseases (NCDs) such as cancer, diabetes, heart disease, chronic kidney disease, stroke, hypertension and others  predicated on obesity which are the the leading underlying cause of morbidity and mortality in Jamaica.  The Minister noted that globally, obesity rates have doubled in the last 30 years with Jamaica’s obesity rate increasing by 1% per year.

A decade ago, the estimated annual cost for diabetes and hypertension in Jamaica was staggering at about 5.9% of GDP.  Recent national surveys have indicated an increase in these numbers – 9.7% for diabetes and 20.6% for hypertension.  The Health Minister lamented that “left unchecked, obesity and its consequences will not only retard health and economic development but importantly also erode the health advances made in the last decades.”

He pointed out that the increasing rates of consumption of sugar–sweetened beverages globally, has prompted the World Health Organization (WHO) to urge Member States to develop guidelines, recommendations or policy measures to reduce the content of sugars in foods.

Minister Tufton congratulated UTech, Jamaica on organizing the symposium as part of the answer to the WHO call and shared with the audience on the host of multi-faced strategies being spearheaded by the Ministry of Health to combat obesity, particularly childhood obesity including the most recent #Jamaica Moves national campaign launched in April 2017.

Minister Shaw Warns Manufacturers
Hon. Audley Shaw, CD, MP, Minister of Finance and The Public Service warned manufacturers of SSBs to reduce the sugar content of their beverages, especially those marketed to children, rather than wait for the Government to implement taxes.  “We want to urge manufacturers to take a very serious, urgent look at the sugar content of their beverages,” he said.  Pointing out that Jamaicans consume more than two billion eight-ounce servings of sugary drinks per year, Minister Shaw said “I am saying to manufacturers today, you can either respond voluntarily, or we as a Government can respond to the needs of the country through appropriate policy prescriptions,”  adding that  “fair warning, therefore, is being given today.  Start the process, don’t wait for the tax axe to come,” he emphasized.

I am saying to manufacturers today, you can either respond voluntarily, or we as a Government can respond to the needs of the country through appropriate policy prescriptions
Hon. Audley Shaw

Are Jamaicans Ready to Change their Sugar and Fat Consumption Habit?
Professor Fitzroy Henry in a presentation looking at whether Jamaicans are ready to change their sugar and fat consumption habits,  provided information on changing patterns of food and nutrition in Jamaica and sugar-sweetened beverage trends in Jamaica over several decades.  He cited data which revealed that adult overweight/obesity trends in Jamaica have risen from 45% in the year 2000 to 60% in 2016.  Professor Henry called for more structural approaches in behavior change efforts to include more public education, regulations and standards and fiscal incentives and measures.

In the last 5 years several countries around the world have introduced a tax on sugary drinks, including Mexico, Chile, eight jurisdictions in the USA, the UK, Norway, Ireland, India, Finland and in the Caribbean – Barbados and Dominica.  Looking at the challenges and implications in some of these countries, symposium presenters shared their research and perspectives on some of the legal and economic implications of a tax on SSBs.

Legal Officer in the Ministry of Health, Mrs Sheryl Dennis Wright cautioned that despite the need for tax imposition on SSBs, Jamaica must be mindful of bilateral agreements with CARICOM and other existing international trade agreements.  “Jamaica cannot impose import duties applicable to all the member states of CARICOM unilaterally,” she cautioned.

Watch a selection of the speakers and presentations below.

Reflections on Sharjah – What the World is Doing