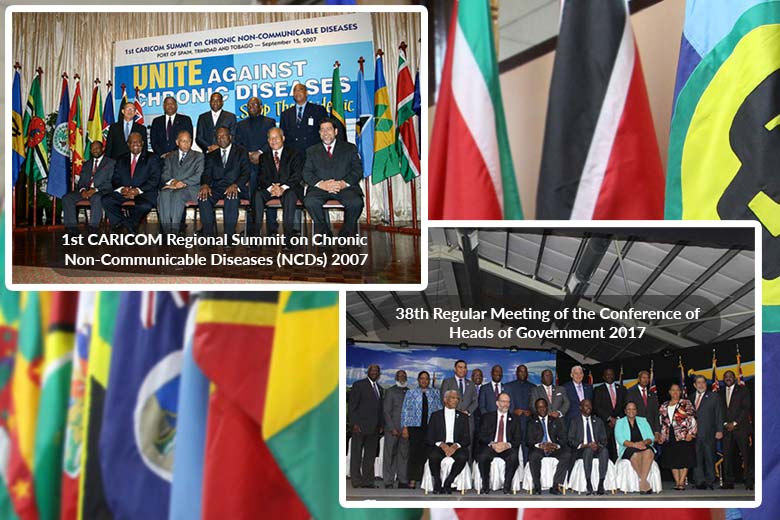 CARICOM Leaders Fall Short of 2007 Predecessors – In the context of NCD Prevention and control, the 38th Meeting Communiqué binds our leaders to essentially very little other than support for public health education initiatives.

On July 30th, the HCC wrote an open letter to CARICOM Heads of Government in lead up to the 38th Regular Meeting of the Conference of Heads of Government. The letter called on Heads of government, in this, the 10th anniversary year of the landmark Port of Spain Declaration (POSD) on NCDs, to reaffirm their collective commitment to addressing the epidemic of noncommunicable diseases (NCDs) in the Caribbean. Following the release of the official meeting communiqué on July 7, 2017, the HCC is compelled to write the following statement.

On the heels of the 38th Regular Meeting of the Conference of Heads of Government, the regional media was quick to sing praise, announcing various verbal NCD ‘commitments’ emerging from the meeting which in their zeal boldly paid homage to the 10th anniversary of the seminal Port of Spain Declaration (POSD10) with specific references to childhood obesity, tobacco and multisectorality.

However, in stark contrast, the Communiqué arising from the Meeting was underwhelming and lacked the teeth one would have expected for a POSD10 Communiqué. While an entire section of the Communiqué was dedicated to NCDs, the section floundered, with noncommittal language, allowing far too much room for ambiguity and frankly bewilderment …leaving one asking how do we reconcile the Communiqué with the bold announcements around tobacco control and childhood obesity prevention made during press briefings?

While the Communiqué acknowledged insufficient action since 2007, one would have expected in response, pledges to accelerate action through specific policy implementation.  This was not forthcoming. Heads simply ‘noted’ the urgent crisis of childhood obesity in the region which now affects up to 1 in 3 children and threatens to undermine entire generations. Solutions were limited to the promotion of healthy food consumption and increased physical activity. No mention was made in the official communique of fiscal policies to make the healthier choice the affordable choice despite media reports that taxation was a major area of discussion.  Tobacco control was uncomfortably absent with no commitment of Heads to take action on enacting mandates of the FCTC which they had ratified some 10 years ago. In arguably, the strongest statement of the NCD section in the Communiqué, Heads ‘urge[d] acceleration of the Public Education Programme on Healthy lifestyles’; which in the absence of policy recommendation, lays the responsibility for the NCD epidemic and the exponential rises in NCD risk factors, solely at the feet of individual Caribbean citizens – essentially relieving states of their responsibility to create healthy, supportive environments.

Last year’s Communiqué following the 37th Meeting of Heads of Government of CARICOM was far stronger in explicit recognition of the problem and commitment to action than its successor.  Heads ‘pledged’ at the 37th Meeting ‘to address issues such as; the banning of smoking in public places; trade related measures; banning advertisement of potentially harmful foods which specifically target children; and elevating taxes on foods high in sugar, salt and trans-fats’. One year later, even as Heads acknowledged the pioneering vision of their predecessors in 2007, and looked towards the 2018 UN HLM and further afar to 2025 and 2030, they were expectantly impressive in their rhetoric but disappointingly unable or simply unwilling to commit to decisive NCD action.

The essential problem with the 2017 Communiqué is the glaring absence of concrete commitments to NCD prevention and control.  And why is this important especially against the background of Heads’ quoted acknowledgments of urgency? The fact is that the Communiqué acts as the singular public-facing ‘outcome document’ for the annual meeting of the regions leaders, providing a summary of key discussion points and priority actions moving forward. And although we acknowledge that stronger commitments may lay ‘behind the scenes’ and rest in ‘confidential’ internal documents – this of no use to us as advocates. The Communiqué is the only document that CARICOM citizens can refer to for an official account of the meeting.   It represents a public record of negotiations and ‘confirmed’ conclusions for the sake of transparency and accountability.  In the absence of the Communiqué, the only public references of the meeting lie in press reports which are far less powerful as tools of accountability – representing as they do interpretations of what occurred and decisions taken.   An essential role of civil society organisations such as the HCC is to hold key actors including governments, accountable to their NCD commitments.  When our leaders make public, recorded commitments, they are creating a legal (and possibly binding) space for civil society advocates to hold them to account.

In the context of NCD Prevention and control, the 38th Meeting Communiqué binds our leaders to essentially very little other than support for public health education initiatives.

Perhaps the failure to communicate the urgency was ours – public health practitioners and advocates who joined arms to present a unified call for action around 3 priority areas – tobacco control, childhood obesity and multisectorality. Perhaps we were speaking the wrong language in these unique times of economic hardship. The failure was likely our inability to present a sound financial case – linking NCDs to the issue of the day – the dire economic situation facing many of our countries.

Whatever the reasons for the uninspiring Communiqué in the area of NCD prevention and control, as we move forward, we as advocates need to do a much better job of inspiring our political leadership into prioritizing NCDs and translating this political commitment into policies and programmes which reduce NCD morbidity and mortality. The reality is that we in the Caribbean are performing poorly and miserably off track to meet our NCD targets. If we are to turn the tide, politicians must be bold, fearless and transparent – placing firmly on record their commitments to accelerated policy and legislative action. Once done, this paves the way for civil society to effectively play our roles of educating the public and advocating directly to policymakers in order to facilitate the passage of effective policies and legislation while at the same time acting as “watchdogs” to ensure accountability of our leadership.

As the Tenth Anniversary of the historic Port of Spain Declaration “Uniting to fight the Non-Communicable Diseases (NCDs) draws near, the Heads of Government recognised the progress made in addressing the issue. They acknowledged, however, that progress was variable and agreed to adopt a more holistic approach. In this regard, they pledged to address issues such as the banning of smoking in public places; trade related measures; banning advertisement of potentially harmful foods which specifically target children; and elevating taxes on foods high in sugar, salt and trans-fats.

They recognised that the Community had not sufficiently advanced the recommended actions with regard to the Declaration and in that regard recommitted themselves to the promotion of healthy lifestyles to combat the epidemic of NCDs.

Heads of Government supported the use of inter-sectoral approaches to address current health challenges.

They noted with concern that obesity in children represented the greatest threat to the health of future generations with the level of overweight and obesity being more than 30 % in both primary and secondary school populations in many Member States.

Heads of Government also supported the strengthening of domestic food production along with the promotion and consumption of nutritious indigenous foods.

Heads of Government urged the promotion of Physical Exercise in school-age children and an acceleration of the Public Education Programme on Healthy lifestyles.

Heads of Government received a message from Mr. Michael Bloomberg ensuring his support and welcomed the interest expressed by the Bloomberg Foundation in NCD Prevention in the Region.

Learning from Each Other – National NCD Commissions