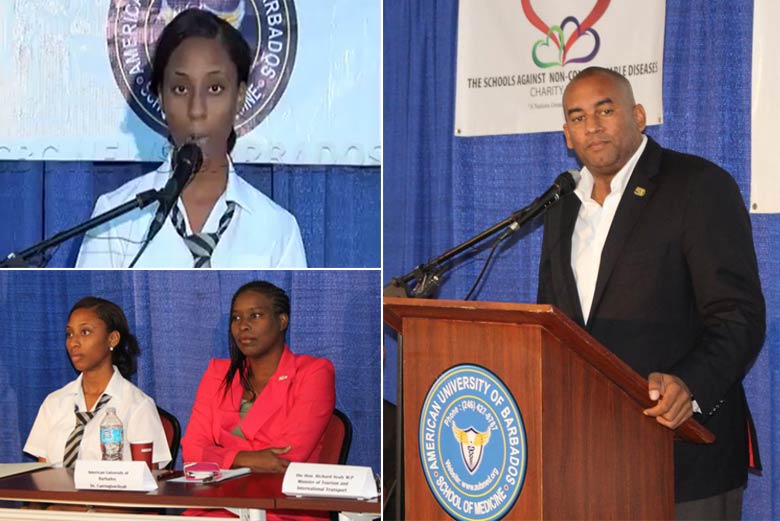 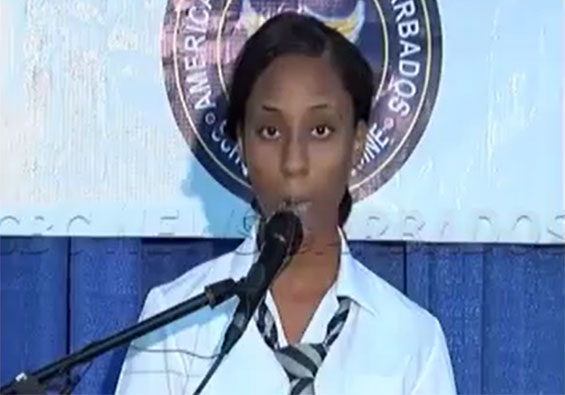 Co-ordinator of the Schools Against Non-Communicable Diseases initiative, Ashley Lashley

Watch the CBC video report of the launch here.

The American University of Barbados (AUB), to play it’s part in reducing NCDs 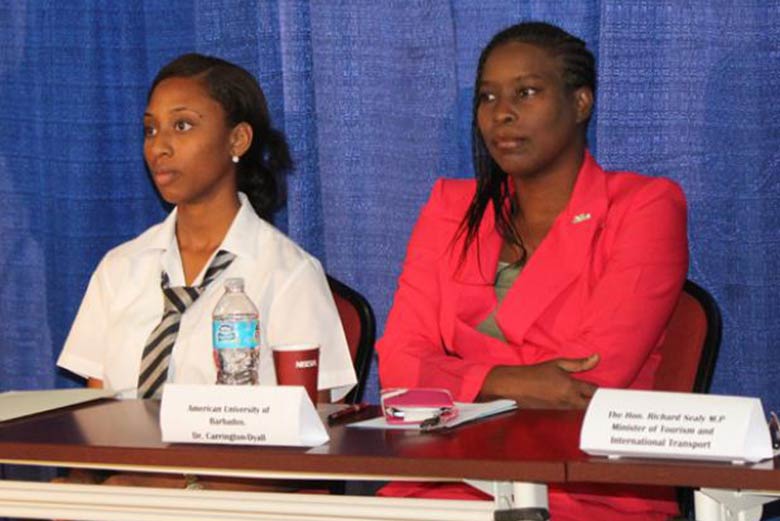 The American University of Barbados (AUB), School of Medicine is committed to playing its part in reducing the prevalence and complications of Chronic Non-Communicable Diseases (CNCDs) in Barbados.

AUB representative Dr. Angela Carrington-Dyall acknowledged the above, as she spoke at the launch of the Schools Against Non-Communicable Diseases Charity Fun Walk and Health Fair, which was held this week at the new campus of the American University of Barbados, located at the former BET Building in Wildey, St. Michael.

While stressing that CNCDs like obesity, Type II diabetes mellitus, hypertension and certain forms of cancer do hold a genetic predisposition, she however maintained that they also carry an increased risk that is closely associated with lifestyle choices.

It is therefore within our hands to make the choice to reduce our risk of CNCDs and the risk of those around us and this walk signifies not only a means of ensuring awareness about this cause, but it affords an opportunity to put into practice one of the known methods of reducing the risk of many of these CNCDs – exercise

One other method, she said, is to investigate causes, as well as preventative and curative measures and the AUB she stressed, is focusing on this aspect.

“At AUB and our mother university Era’s Lucknow Medical, we join hands with local, regional and international researchers, into the mechanisms that may be impaired in these conditions and some that may be exploited to correct them,” she stated.

“Some of the research targets the alleviation of symptoms, while others are aimed at reducing the associated complications. Since many of these conditions only become symptomatic quite far into the disease, it is good to see young persons willing to take charge of their lives, with respect to these conditions and also to inform their peers,” she further commented.

It was also noted that the AUB, in association with ERAS, has launched its international peer review journal called the “Era’s Journal of Medical Research” and 25 per cent of those articles deal with some aspect of CNCDs. The AUB Rep meanwhile revealed that in the near future, the AUB will likely be able to offer even greater assistance, with its proposed clinic. Cheap generic Levitra medications from http://www.trendingdownward.com/generic-levitra-cheap/ and available Vardenafil by mail order.

Prevention is the Key in the Fight Against NCDs

To better tackle non-communicable diseases (NCDs), the process of prevention must commence in the formative years. 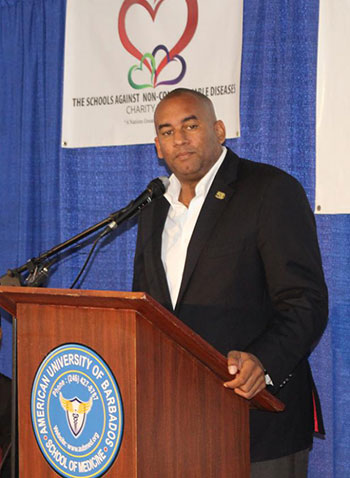 This is according to Minister of Tourism and International Transport, Richard Sealy, as he delivered an address during the launch of the Schools Against Non-Communicable Diseases Charity Fun Walk and Health Fair, which was held this week at the new campus of the American University of Barbados (AUB) – School of Medicine in Wildey, St. Michael.

Issuing a reminder that chronic non-communicable diseases are preventable in large measure, Minister Sealy stated, “That process of prevention of necessity has to start during your formative years. You can’t talk about starting prevention when you are turning fifty. You have to start when you are young.

Therefore, this effort is completely appropriate and should be saluted. It is the school children themselves, the young people that are leading this initiative and I think that augurs extremely well for us to see how some of our young people are thinking

This is not only a health issue, this is a national issue. This is a developmental issue. The incidence of non-communicable diseases in Barbados is way too high

Sealy pointed out that there are some “very unflattering labels” being given to Barbados, which is seen as the amputee capital of the world due to the high incidence of diabetes. He also made mention of the “unflattering statistics about obesity in young people”, as well as the fact that there is an entire ward at the Queen Elizabeth Hospital dubbed the Cancer Ward. As such, he stressed that there is some work to be done in combating NCDs.

Co-ordinator of the initiative, Ashley Lashley of the Lodge School meanwhile told the Barbados Advocate that she felt the need to pool youth together to tackle the issue of a high incidence of NCDS in Barbados and across the region and hence the launch, which saw students from primary, secondary and tertiary schools coming together to lead in the fight. She also expressed gratitude to the AUB for partnering on the initiative.

She meanwhile made a call to governments across the region, starting with Barbados, to work harder to significantly reduce the high levels of sugar found in beverages. Also, to introduce a permanent subject on the school curriculum that places greater focus on living a healthy lifestyle, with heavy emphasis on sports and nutrition, two essential components in helping to combat NCDs. This latter call was later endorsed by Minister Sealy.

The Schools Against Non-communicable Diseases Charity Fun Walk, which is being hosted in conjunction with the American University of Barbados (AUB), is scheduled to take place on July 4th, starting at the Barbados Community College from 9:30 a.m. and ending at the AUB with the Health Fair.

NCDS What’s in a name? A call to reframe Non-communicable Diseases