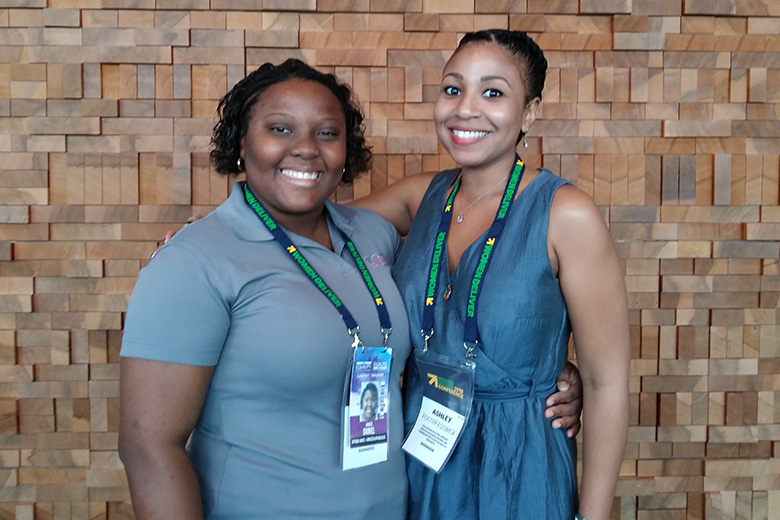 Vancouver, Canada set the stage for the largest conference on women’s sexual and reproductive health and rights for the 5th time in a row; thanks to a leading advocacy group Women Deliver. Women Deliver describes itself as a global advocacy organisation working towards gender equality through reducing maternal mortality and achieving universal access to reproductive health. Women alone do not make up the composite of workers, volunteers and advocates who strive to promote what the group calls its unwavering commitment to girls and women. The denotation of Women Deliver simply strives to place a unique, critical and focused lens on women’s health and rights.

Women, men and youth from every corner of the world descended on the cosmopolitan city of Vancouver from June 3rd to June 6th for a four- day dialogue, many of the youth represented were Ambassadors from the Caribbean Community some travel scholarship recipients, speakers and bona fide Women Deliver Young Leaders. These movers and shakers commit their daily lives to serving humanity with an emphatic understanding that the female identity and prowess must be protected. It was an awe-inspiring privilege to have access to this space as a Young Leader with the conservative winds of right-wing agendas demanding a back slide in women’s rights, communities like Women Deliver offer affirmation that power, progress and change are reachable. 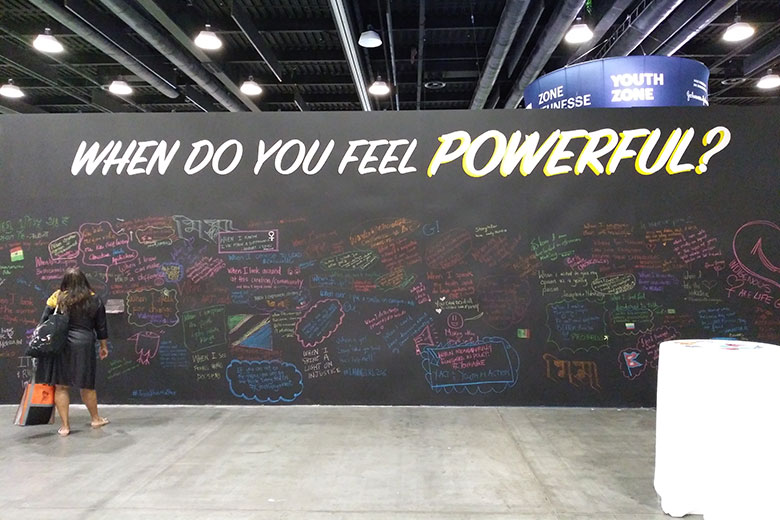 Power. Progress. Change. Three words that marked the theme of this year’s conference and there was no denying that as Young Leaders we were tasked with critically analysing our individual power at the first Youth Pre-Conference entitled Speaking Truth to Power. Mouthed from the words of presenters and appearing on every marketed memorabilia was the question “How will you use your power for change?” A common thread throughout the youth pre-conference was power for change can look differently for different people. Reinventing call to actions with the help of social media was examined closely, “artism” the merge between arts and activism took centre stage with spoken poetry from Trinidadian Deneka Thomas and other performances. But there was also critical insight that for youth participation to work movements must be diverse, vibrant and aim to involve each individually equally.

Katja Iversen, of Women Deliver, during the opening plenary drove this point home emphasising a real need for youth engagement to address today’s issues, referring to young people as “custodians of messages”. The tone of her address was solemn when discussing the current political landscape, she acknowledged that power dynamics have shifted, and we need look no farther than to the United States of America to see this with the Trump administration currently in office. Justin Trudeau Prime Minister of Canada and self-proclaimed feminist echoed a similar tune stating that “power can backslide” and Ethiopian President Sahle-Work Zewde remarked that “there is no template on how to deliver power”. These points let us know what we already know that the work to securing healthy lives for women, girls, their partners, families and friends is far from over.

Gender is a key determining factor for access to health, health literacy and health system navigation. Strengthening youth to become and stay motivated to be agents of change is one way to claim power. Women Deliver featured a dedicated Youth Zone where speeches were held, one of which was by First Lady of Canada Sophie Grégoire Trudeau. The Youth Zone also showcased solutions workshops, a meditation and self-care retreat; hosted a speed networking session and silent disco. The Power Stage adjacent to the Youth Zone featured social enterprise pitches where social entrepreneurs competed in a Shark Tank inspired competition. Each competitor had a total of ten minutes to convince a panel of experts about the potential of their good or service to improve the lives of girls and women. Women Deliver’s print material including magazines also featured the ideas and work of youth predominately. However, the speaking opportunities offered to youth were perhaps the pinnacle of investment.

I am proud to feature 19 year- old Janece Daniel of I Am A Girl Barbados, who spoke on three panels hosted by Women Deliver. We met in Vancouver and I had the opportunity to ask her a few questions after her speaking engagements.

In conversation with ambassador for change Janece Daniel, 19 of I Am A Girl Barbados

AFE: Tell me a bit about yourself and your work as an advocate.

JD: I am a nineteen- year old girl who enjoys helping others however I can and as the General Assistant of I Am A Girl Barbados I get to aid in the design of programming events and outings requested for and by the girls in our organisation.

AFE: What do the words Women Deliver mean to you?

JD: The way I see it is only through women can life be born into this world so only through us uniting as women and girls can we deliver an equal world for all our sisters out there.

AFE: Explain how your participation at Women Deliver became a reality.

JD: Well last year Alian, our Founder, said that I had been selected to attend a conference because she saw that I was working hard, and she wanted me to build my capacity in gender equality and gender affairs. I remember being so excited because it would be my first time travelling. Then about four months ago it was announced that I would be, I would get to speak on panels organised by one of our funders from the U.K. With and For Girls.

AFE: What is your agenda for the conference? How do your speaking engagements match the objectives of your agenda?

JD: Our agenda for the conference is to build capacity in gender affairs and gain strategic partnerships and strategic partners that can aid in conducting research and programming for our girls. With speaking engagements, the speaking engagements that I did were to allow persons to see who we are as an organisation and what our plans are and how we have been going about doing so, so that they can become interested in working with us.

AFE: Today I had the privilege of witnessing you in action. I saw you speak up for girls’ rights in Barbados and in many ways for young girls in the neighbouring CARICOM islands. I sensed that you remained true to yourself. How do you feel?

JD: I feel truly honoured to be able to represent my sisters in Barbados and in the Caribbean to show people that it is not only paradise, but we are real people with real problems.

AFE: During your dialogue you placed a strong emphasis on girls’ rights and the importance of educating young females about their rights. The theme for Women Deliver is Power. Progress. Change. Share your thoughts on power in Barbados; the level of progress being made for youth, girls especially, and discuss any recent changes you have noticed that impact youth livelihoods and their fundamental rights.

JD: I believe that they are a lot of old-fashioned thinkers making decisions in a modern world for modern people and because of these persons and because these persons stay in positions of power, they don’t allow for there to be change. They think traditional values would be lost. Over the years there has been more movement for youth led organisations, but they are gaining more support and with that more confidence to stand up for their, for our rights. And, and stand against those that keep our nation from progressing. We, we’ve seen girls feel more powerful knowing their rights in cases where they felt they had.

As a Youth Advocate and member of the Healthy Caribbean Coalition it was a pleasure to be in the company of fellow activists such as Janece, but it would be a huge injustice not to highlight that the spotlight on non-communicable diseases was minute and overshadowed by the overwhelming SRHR push.

At Women Deliver 2019 I had the privilege of attending two sessions that addressed NCDs. The first Out of the Shadows: Addressing and Treating Maternal Mental Health was organised by the Maternal Childhood Survival Program with UNICEF and the World Health Organization.

Cultural outlook (what should be included in these takeaways):

The second session which included round table discussions and a panel by expert speakers including Her Royal Highness Princess Dina Mired of the Union for International Cancer Control was hosted in collaboration with Help Age International, NCD Alliance and the International Federation of Gynecology and Obstetrics. The session entitled A Global Health Tsunami: Non-Communicable Diseases was informative and provided fact- based knowledge on the current NCD landscape.

Cultural outlook (what should be included in these takeaways):

Women Deliver is an institution that uses its power to progress meaningful change in the world by giving voice to issues in one singular space. Despite this the NCD agenda deserves more focus at its upcoming conference in 2022 and I hope this representation can be done by CARICOM youth leaders and experts. 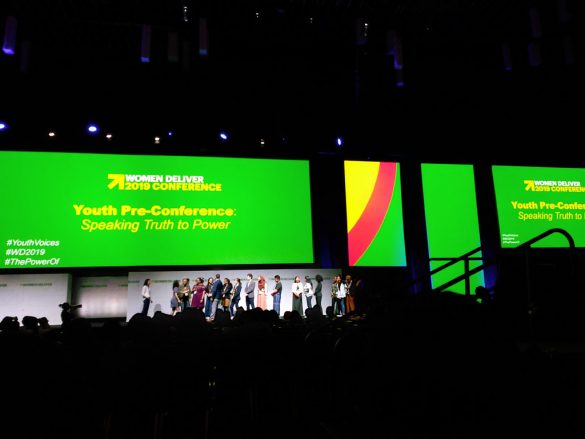 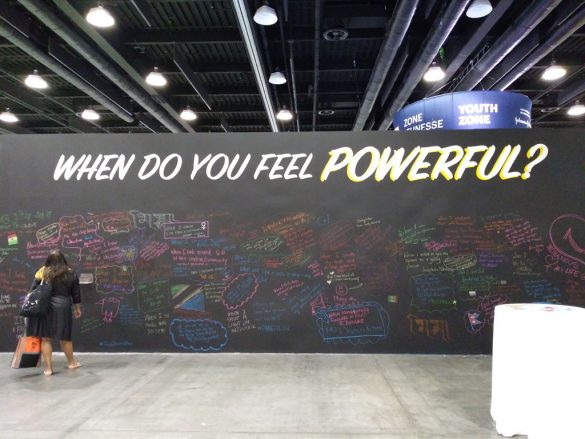 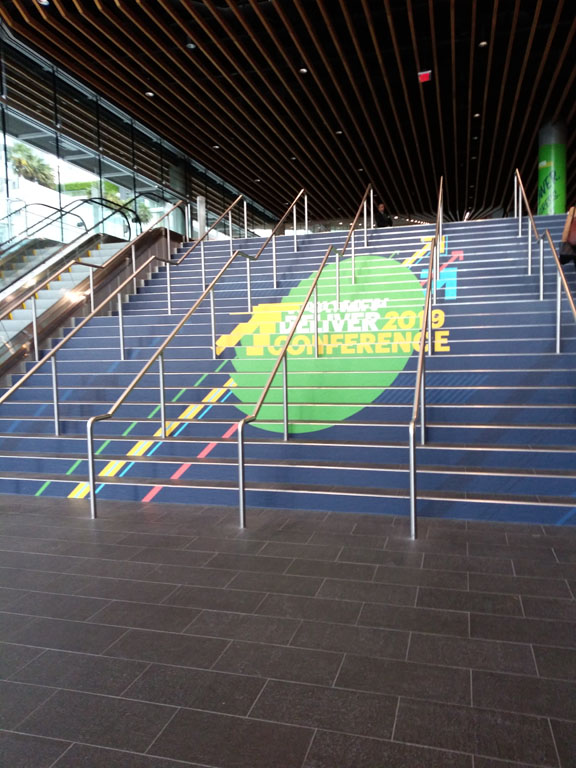 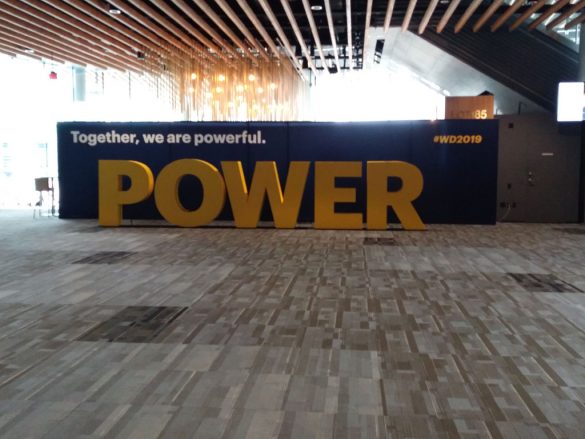 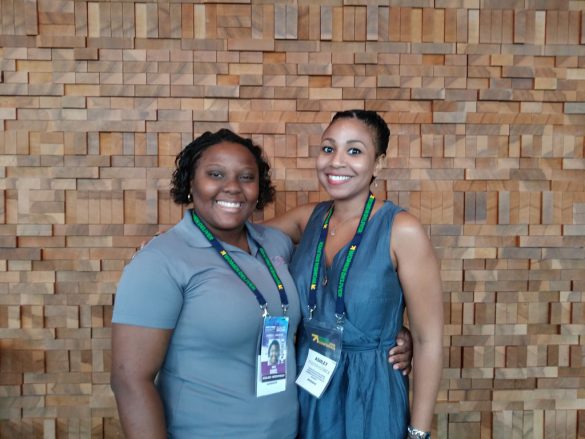 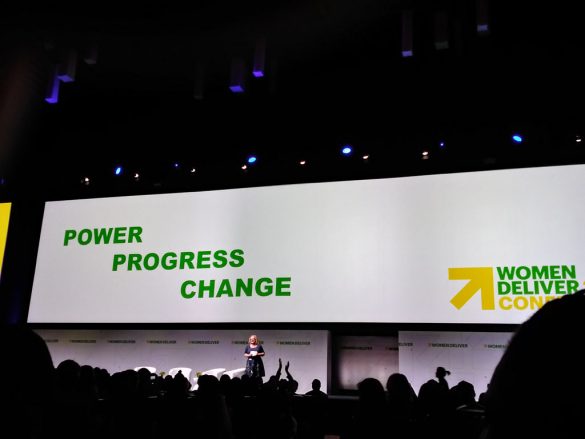 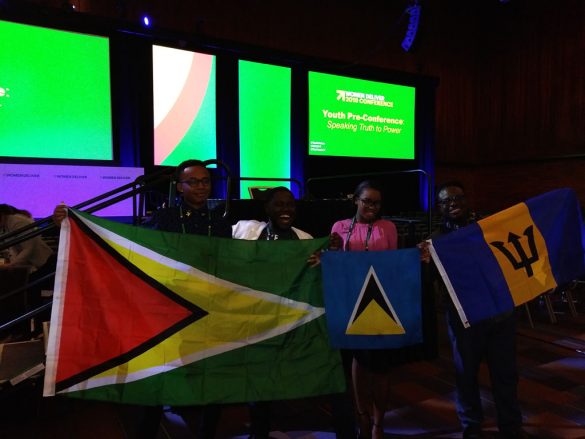 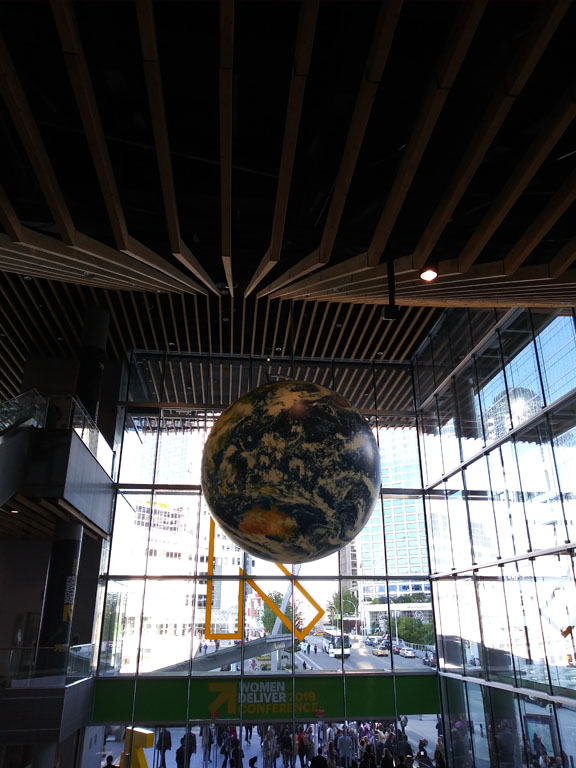 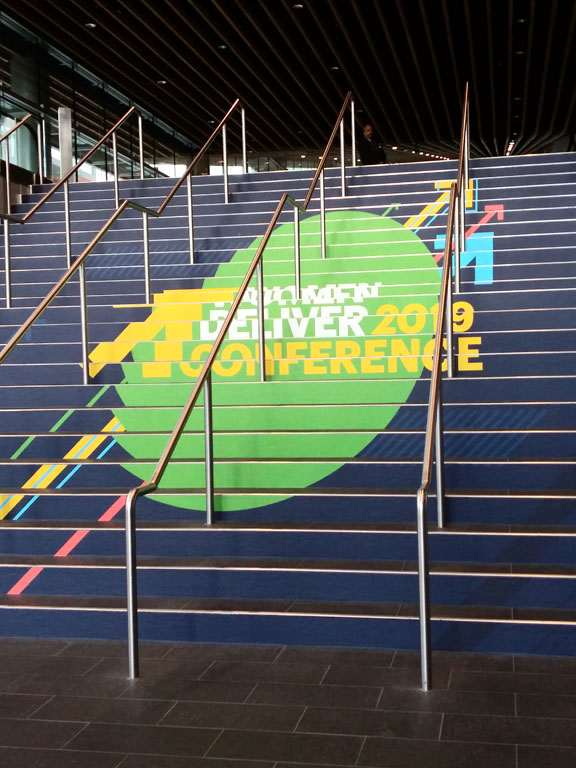 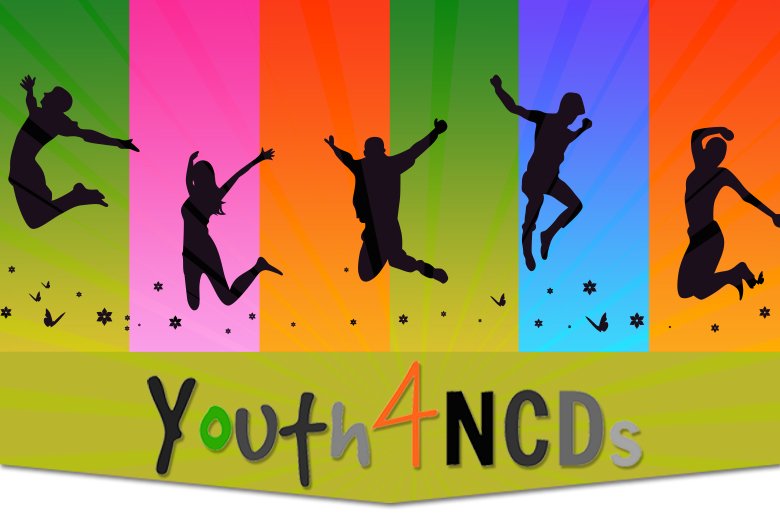